It's been a crazy few weeks around here. We put our house on the market and bought a new one. With all the fixing and cleaning required to put our house for sale, my husband's 34th birthday quietly came and went. No big deal he said, we can celebrate a few days later when the craziness dies down. So a Father's Day/Birthday celebration it would be. I was getting excited because since the baby was born 8 weeks ago, I've completely neglected my other blog, Baby Got Cake. Without being at work and having people to eat it for me, I needed a real reason (other than something like, "It's Tuesday! Yay!") to make a cake.

But my husband decided to break my heart. He's told me this before, but no matter how many times he says it, it just doesn't compute. "I don't really care for cake." Every cake making occasion that rolls around for him, I ask because I really can't comprehend someone NOT liking cake. What's wrong with you? But it's the man's birthday and he's a great father, so I say give him what he wants. French silk pie it is. 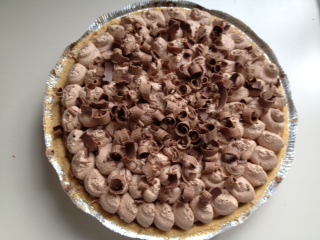 Please don't mind the bad pictures. They are (gasp) cell phone pics. The real camera is packed away. Oh, and for that matter, so are my piping bags so excuse my Ziploc decorating. This moving stuff is really cramping my style...

Anyway, it's not quite your typical french silk pie. It's a graham cracker crust (not homemade per my husband's request and I was happy to oblige). Most of the time, these are made with a nice flaky pastry crust. You may also notice that the whipped cream is chocolate. More on that later.

The base recipe is from the Pioneer Woman. She NEVER lets me down. But in my typical fashion, I managed to screw up a very simple recipe. I used some leftover Ghirardelli baking chocolate I had in the cabinet, but it was missing the wrapper. I figured that each square was an ounce like the other brand I normally use. I figured out later, I was wrong. I gave the beater to Nate to taste and he asked, "What flavor is this?" It's a French silk pie, so it's obviously chocolate flavored. This was his way of telling me he couldn't taste it. I got all offended and stormed off to continue to make my pie. How dare he question my baking ability?! 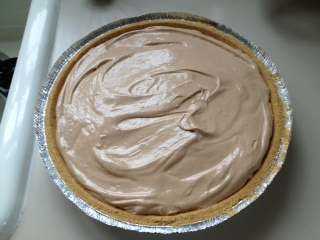 But then I put it in the crust and noticed it looked a little...light colored? I had thrown out the label on my baking chocolate so I looked it up online and sure enough, each square was only a half ounce. It had half the chocolate flavor it needed. Don't tell my husband he was right, he still doesn't know.

I had to fix it somehow because I didn't have extra ingredients and was already invested time-wise. I thought maybe I'd put chocolate shavings on the top and bottom of the whipped cream and make the whipped cream chocolate instead of white. As usual, I asked my Baby Got Cake blogging partner for advice and she concurred so that's what I did. I swear, if I had my own baking show, it would be called "J Saves the Day". 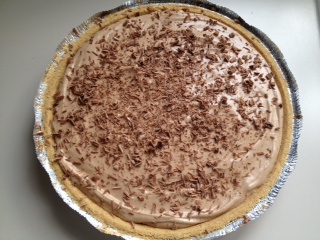 So there it is with the shavings on top. I meant to do curls, but the bar was too frozen at the time. No matter, this worked out better anyway. I'm learning :) The chocolate whipped cream recipe comes from  The Joy of Baking. This stuff is good enough to eat with a spoon. Not saying I did. But I might have.

So, I hope my cake hating husband loves it. If I remember later, I'll take another lovely cell phone picture of a piece and update. Happy Father's Day!